Because it has been so successful, the President of Mexico awarded Alro & Co with the National Exports Award.

This Award is a testament to the company’s dynamic presence in the specialized field for exports.

In 1997 Alro & Co., launched a joint venture with a Spanish Company to build a hollow glass Factory in Central México to penetrate USA, Canada & Latin countries. besides the European costumers. The idea behind was to integrate the mouth blown artisans with the machine made molds.

Alberto Romo-Chávez Jr. begins his International career in United States as Assistant Store Manager at Pier 1 Imports (currently a chain with over 1,000 stores).

He wins promotion to Specialist in Latin America Merchandise at Pier I Imports headquarters in Fort Worth, Texas. His responsibilities include locating viable merchandise, as well as adapting and developing products in Mexico, Guatemala, Costa Rica, Ecuador, and Bolivia for export to the U.S.

Alberto joins a wholesale firm located in Los Angeles, CA, as Director of Merchandising. The company specializes in baskets, furniture (made of wood, metal, leather and other natural fibers), tableware, ceramic vases, pottery, jewelry and textiles. His experience provides him with a thorough understanding of the wholesale industry, learning first hand of each and every aspect of this distribution channel.

Taking advantage of Mexico’s prosperous economic situation, he begins importing products from Europe and the Orient and develops a Franchise Chain to commercialize his imported goods. This enterprise introduces a new business format to Mexico’s market (the Franchise concept would years later become widely practiced in the world). In one year he opens 21 stores throughout Mexico.

Due to Peso devaluations, the Mexican government changes its Economic Policies regarding importation, essentially banning the activity. This governmental policy forces Alberto to close his import company and focus on exporting.

Alberto create Alro Exportaciones, S.A. de C.V. (Corporation) immediately thereafter, Pier 1 Imports appoints him “Buying Agent in Mexico.” Later he becomes an agent for other important chains such as William-Sonoma and Pottery Barn of San Francisco. He exports high volumes of over 400 different products in such categories as furniture, glassware, food, jewelry, toys, textiles etc. His company suprvise the manufacture of these items by small, medium and large-size companies.

Founder and President of the AMCHAM Foreign Trade Committee

Founder and President of the AMCHAM Foreign Trade Committee. President for 15 years also, Member of the Board.

Coordinating with the American Consulate in February, he organizes the first “Franchise Seminar” held in Mexico, resulting in the creation of the Mexican Franchise Association (Asociación Mexicana de Franquicias).

Coordinator of the event “UN-CRATE THE SUN” by EATONS

EATONS a Canadian Department Chain with over 100 stores named Alberto to coordinate the event “Un-Crate the Sun” to promote Mexican goods. The event is a great sales success that was duplicated immediately. In additions according to NUMERICS LTD the increase of tourism in Mexico grow 37% in the next year.

He organizes and participates actively as a moderator in the conference How to sell consumer Products to Chain Stores in the United States. As a result, numerous companies in the region begin to sell their products to U.S. chains. This event attracts the participation of buyers from important U.S. Companies such as JC Penney, Price Club (Costco), Wal-Mart, Storehouse, Cost Plus, American Food, Flemings, etc.

Is selected to organize in México the Fair “Klondike Days” in Edmonton, Canada

The Fair, now named “Mexican Fiesta”, experiences great success. 777,000 visitors attend during the 10 day celebration. 65 different companies exhibit and sell Mexican products. Artisans work throughout the fair grounds. The Prehispanic National Museum provides cultural entertainment. Mariachis and the Folkloric Ballet contribute. More than 250 people from all over Mexico participate. Alberto handles the organization, consolidation, shipping and logistical aspects involved in the operation including negotiations with Canadian suppliers regarding construction of the booths. Furthermore, Alberto organizes, through the “World Trade Center of Edmonton” the Seminar “Dealing across Two Borders,” in which he also participates as a guest speaker. More than 300 attend.

The Canadian Government invites Alberto to give a lecture

The Canadian Government invites Alberto to give a lecture at the “Au Cercle Omer Deserres” (an organization recently visited by former U.S. President Bill Clinton).

In Montreal he represents Mexico in signing the “The Trading Houses Association Treaty” with several countries among them United States, Canada, France, India, Mexico and others.

He begins giving lectures inside and outside Mexico to Universities, Private Organizations and Governments. Several States Governments employing him, to develop export platform.

Jalisco Industrial Club (Club de Industriales de Jalisco) under the sponsorship of the American Chamber of Commerce of Mexico.

A similar event, sponsored by the local Government, held in the city of Aguascalientes (population one million) with an attendance of more than 300 people. Within 90 days, six local companies had been transformed into exporters. Altogether the companies employed over 400 people, including handicapped, to manufacture products for export. In addition, Alberto brought together companies in the Metal-Mechanic industry, to manufacture pieces necessary to complete one final product. They shared tools and manufacturing knowledge assisting in the development of additional products. (A task very difficult to accomplish in Latin countries).

Start a multi-millon dollar Project with V. de Levante to build a glass Factory in México

To complement his glassware lines and improve semi-artisan production techniques, Alberto travels to Europe and initiates a joint venture worth several million dollars with Vidrieros de Levante. The company built a hollow-glass factory to manufacture products to supply NAFTA and some Latin countries.

Recieves the “Distinguished Company of the Year Award" by The AMCHAM

The American Chamber of Commerce also honors Alro as the “Distinguished Company of the Year”, the first time this award is given to a company based entirely on Mexican exports. No other company has been so honored with these three distinctions in the same year.

The Panamerican Institute of Managing Directors (IPADE -Instituto Panamericano de Alta Dirección de Empresas, (a school ranked among the 10th best Business School in the World by the Wall Street Journal) decides to develop a case study entitled ALRO EXPORTACIONES. The study, later presented to the biggest names in business, reveals Alro as a model Mexican company involved in International Trade. Later, Alberto was contracted by the IPADE as a lecturer in English and Spanish to promote “Culture” in the field of International Trade.

Invited by the government of Colombia to be a guest speaker

Alberto was invited by the government of Colombia to be a guest speaker at two seminars attended by more than a thousand participants given in Bogota and Medellin.

Named President of the Company-University Counsel in International Commerce A.C. CEUCE (Consejo Empresa Universidad en Comercio Exterior (non-profit Organization) Formed in 1992, this counsel brings together all Universities in the State of Jalisco to promote student experience in all aspects of International Trade.

Alberto writes and publishes “How to sell to the Greatest Market in the World ... Without Risk” (Spanish). It is the only book available that provides the correct sequence for exporting. Alberto’s second book in Spanish “Mitos y Realidad del Comercio Internacional en la Globalización" is now available online. His first book in English “Myths and Facts about Global Trade” also available online, focused primarily on the development and growth of SMEs in the field of exports.

Creator of the CECI Philosophy (Culture in International Business). This philosophy is a synthesis of all the practical knowledge he has acquired since 1970 and forms the foundation on which he has developed a 24 hour specialty course and a 120 hours workshop. The course has been taught with great success at numerous Universities, as well as Public and Private Entities. The main objective is to motivate companies and students from different specialties showing them that exporting is easy and profitable when certain International Culture is acquire.

Alberto is appointed Consultant for the Latin America Bank (BID) to work with different groups of manufacturers in Mexico and Latin countries.

Consultant and creator of export platforms for private companies, organizations and government.

At the present time he consults for different companies and organizations in Colombia, United States and Mexico, focusing primarily on the development and growth of small and medium sized businesses that want to export their products. 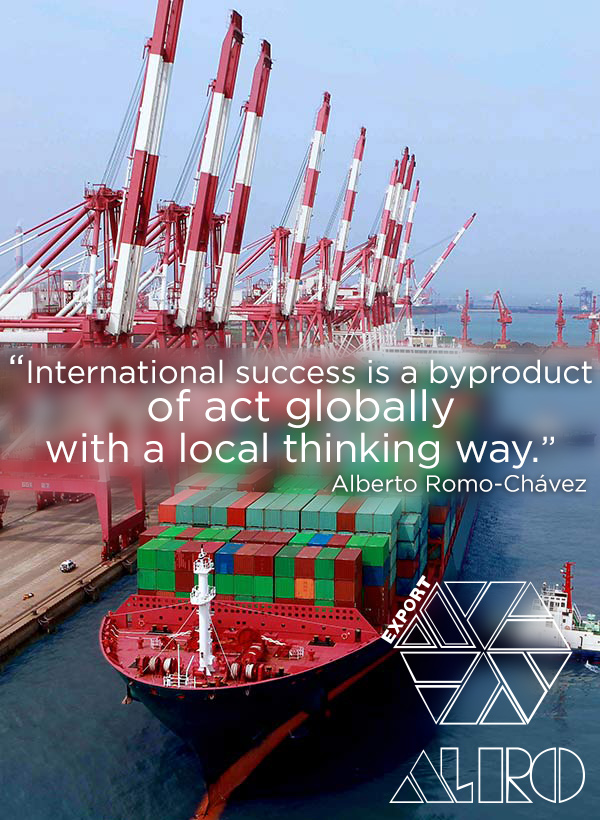 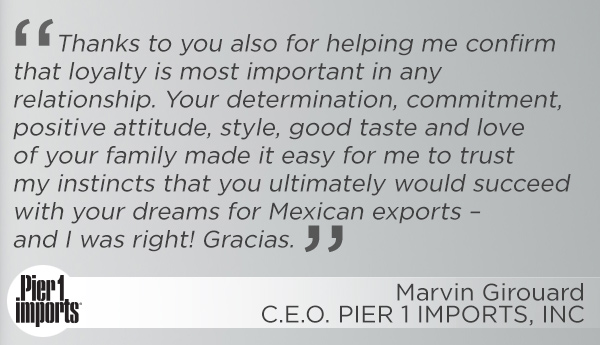